Logitech g433 gaming headset is best for balance. It aims to outperform inexpensive headsets while costing significantly less than typical “pro” headsets at $100. Also, the Logitech gaming headset wants to appeal to gamers, but it doesn’t want to make you feel silly if you use them to listen to music in public. It has a USB sound adaptor and 7.1 DTS Headphone:X technology, but it also comes with extra cables so you may use it with standard 3.5mm headphone and mic connections. Not only is it for your PC, but also for your phone or gaming console. Has Logitech created a headset that can satisfy everyone’s needs? In a nutshell, no, it hasn’t, but considering the cost, it’s still a great headset.

Perhaps the simplest way to think of the Logitech g433 gaming headset is the corded, portable G533 that was just released. It is the same general shape as before, except this time it is covered in mesh material. Since you can genuinely wear the G433 outside the house and are not required to constantly use a wireless USB dongle, they must appear appealing enough that you would want to do so.

They successfully straddle the boundary between “urban streetwear” and “garish gamer” and are sufficiently beautiful. Although the unit I used for my review was black, it is also offered in red, blue, and a blue camouflage variation that will only be sold at Best Buy. Both the colors and the fashion these days are bright and very bold. The cans are circumaural, which means they totally enclose rather than just rest on your ears. Additionally, they are semi-sealed; they don’t have an open back, but they do contain a secret port that lets the Pro-G drivers move a little air. 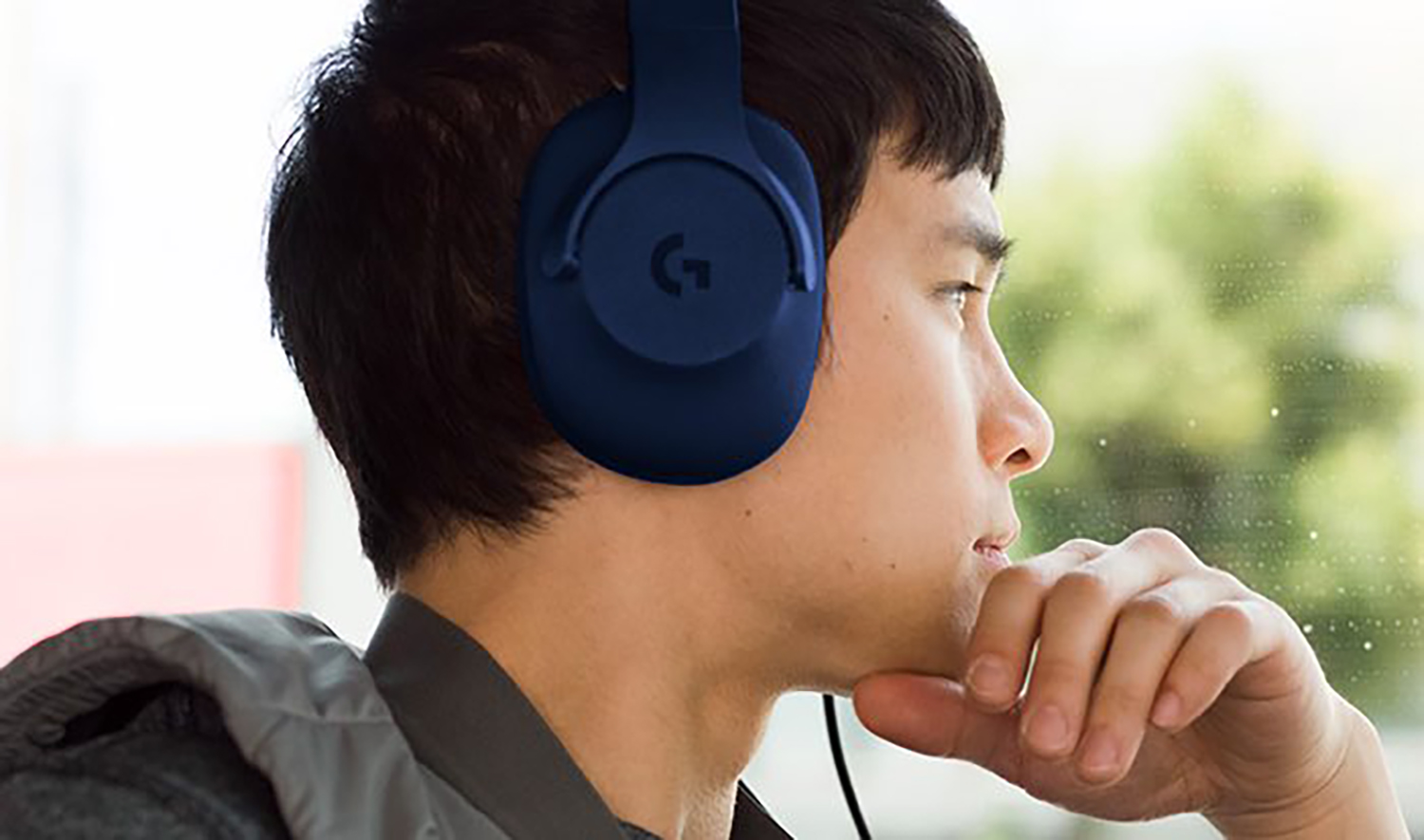 The end result is a cozy and lightweight design that effectively muffles most background noise. You can replace the provided cloth ear pads with a set of microfiber ones if you don’t like the way the cloth feels.

After a few months, you’ll appreciate the fact that the pads are pretty simple to remove and wash. The cans can also be worn around the neck to display my love of music to other passengers on the bus. The user can also swiveled 90 degrees to lie flat for easy travel.

Two interchangeable headphone cables for the Logitech g433 gaming headset plug into the left earpiece’s bottom portion. The braided PC cable contains a mute button and an in-line volume control. A solid volume/mute clip and a durable, high-quality cable give it the impression of lasting a long time. The in-line microphone and command buttons (tap to pause/play, double-tap to skip forward) on the mobile cable, which is made of smooth plastic, take the role of the volume/mute clip. Although the in-line microphone functions well, it is annoying that there is no volume adjustment like there is on most mobile headsets.

The boom mic for the PC cable is removable and built in a flexible rubbery substance. That may be readily bent in the direction you like. In order to avoid the need for a thick foam ball to cover the microphone, Logitech additionally included a tiny, thin pop filter similar to the one on the Logitech gaming headset.

The headset itself is attractive and comfy, however, the building materials have a slightly flimsy feel to them. Although being lightweight is advantageous for extended gaming sessions, I feel that the plastic is too flimsy and has a little too much flex. Overall, the build quality looks comparable to most other headsets in this price range, but it’s disappointing given how well the rest of the product performs.

The combination of the USB sound adapter and Logitech Gaming Headset Software makes the G433 a powerful PC gaming device. Without it, you can use the headset by connecting it to the sound jacks on your PC with the headphone/mic Y-splitter that comes with it. However, if you want capabilities like DTS Headphone:X virtual surround and others, you must use the Logitech software and USB adaptor, which is PC-only.

Really, it’s all quite easy. All of Logitech’s gaming accessories, from keyboards and mice to webcams and headphones, are control through a single software. This software acts as a central hub for all devices together. If you’re totally into Logitech equipment, it’s pretty useful. The software has easy-to-use controls. You can either create your own custom EQ profiles or select one of the six built-in profiles (Flat, FPS, MOBA, Drop the Bass, Cinematic Gaming, or Communications). Additionally, you have control over the side tone, volume, and mic input level (hearing your mic input played back in your earphones). Your preferred EQ settings will load up automatically when a certain game opens if you build up profiles for each game and link them to particular executables.

For DTS Headphone:X technology, you may perform the same thing on the surround settings page. Create per-game profiles, change the volume for each virtual channel, and enable or disable it. Every channel’s default setting is 11 since no one can resist a good Spinal Tap allusion.

Software from Logitech is easy to use, intuitive, and compact. Of course, it also has the advantage of allowing you to operate all of your Logitech gaming equipment. It’s difficult to find anything wrong with it, although I would want to see the Automatic Gain Control option shown here (more on that in a moment).

The Logitech gaming headset sound excellent for a $100 PC headset. No, they lack the clarity of my Astro A50s and can’t compare to my fave Audio-Technica cans. However, it would be difficult to find a PC headset that sounds significantly better for under $100. It has enough oomph in the low end without sounding over-boosted (I’m looking at you, Beats), and the full sound spectrum is clean without sounding too muddy. The USB audio dongle creates clear, noise-free sound without using electricity.

The mic also has a nice sound quality. We don’t advise it for any other recording because it is for the normal speaking range. No one has ever had a problem understanding me, even while the clothes drier was making noise in the adjacent room, because of how clear it is and how well the noise cancellation works. Even with the volume set all the way up, the microphone volume was a little lower than I’d prefer, and there is no “boost” toggle. I instantly navigated to the Windows Microphone Properties settings where I found the “Automatic Gain Control” (AGC) toggle.

Through a set of headphones, the DTS Headphone:X technology performs a really decent job of replicating 7.1 surround. The creeping Typhon in Prey truly gained a sense of depth and location because of the use of real speakers, and I could readily pinpoint the location of distant bullets in PlayerUnknown’s Battlegrounds. The surround sound technology degraded all clarity and created a slightly echo-y sound while listening to stereo sources. For what it’s worth, this is essentially true of any virtual-surround technology I’ve ever used. Disable DTS Headphone:X if you’re using your PC to listen to stereo-only sources.

Of course, they are also excellent with consoles. Since it depends on the USB soundcard, the virtual surround is not available, but you can still enjoy clear stereo sound and microphone input by simply connecting the 4-pole connector to your Xbox One or PS4 controller. If you prefer the in-line mic, you can use the mobile cable with consoles, but the boom mic provides a superior sound, and the PC audio cable has a volume dial and mute switch, both of which are useful.

With the G433, Logitech has a true winner. It’s a great value and gives gamers who want to be able to carry their headset to the console or outside the house with their phone or laptop a lot of versatility. They sound better than the majority of other headphones in this price range and are lightweight and comfy. If you prefer microfiber earpads over Logitech’s mesh fabric, you even receive an additional set. All I want is for them to feel as good as they do. The mesh material and plastic construction feel fairly cheap in comparison to the overall quality of the product.